This beautiful villa of the 18th century with the current configuration, with a symmetrical facade, side terraces and the stem on the back, dating back to 1836 while maintaining all the elements of its period and neoclassicism of the architects Giovanni Lazarini and Lorenzo Nottolini operating at Lucca and authors of important works in Lucca area, such as work on the Villa Reale di Marlia for Elisa Baciocchi, sister of Napoleon Bonaparte, the Teatro del Giglio to Maria Luisa of Bourbon, Elisa Gate in the walls of Lucca, la Specola, the aqueduct and work of urban Piazza Anfiteatro.

Currently the villa is surrounded by a closed about three thousand fitted, surrounded by greenery of palms and pines and Oaks to the North. Spread over three floors, ground floor, first floor and second floor, for a total of approximately one thousand four hundred square metres.

The main facade, facing South, it highlights the geometric plans score, exalted by the diversified surface treatment, with a mock rustication on the ground floor of a different colour from the upper floors treated with smooth plaster, and from string courses bands.

The central part of the façade is highlighted by four pilasters with architrave and the Central balcony with cast iron railing. Symmetric setting is further underlined by the two side terraces. The second floor is decorated with tiles painted draperies on site according to the techniques of the time. Inside the villa a column input of considerable artistic value leads to various service spaces (kitchen, tavern, cellar), to an entirely frescoed and apartment on the main floor, through a large stairway in Matraia stone with antique banister made of cast-iron.

The first floor has a large living room with study, living rooms and bathrooms, two side terraces decorated with terracotta statues. Many of the rooms are still painted. The second floor attic with wooden beams, rafters and terracotta bricks on sight, usually inhabited by bondage, is under renovation. Terracotta floors or stone are original as well as the doors and the windows, which recently renovated, are equipped with shutters.

Of particular importance is the emphasis, both on the first floor and the main floor, the alignment of the doors with the effect of the so-called “a rifle” which highlights a “Parade” of communicating rooms, also typical lucchese architecture of the period. The interiors are furnished with antiques, some particular value.

Belong to the villa and are located in closed an old stables and a carriage shed for a total of about 180 square meters.

Characteristic apartment on 2 levels in the old town of…

Beautiful villa, in Elba Island,  surrounded by about 3,500 sqm…

Villa with a splendid panoramic view of the Gulf of…

Beautiful apartment on the main floor of a Renaissance villa…

Portion of Farmhouse in Greve in Chianti-Casole

In Greve in Chianti, just above the characteristic hamlet of…

Punta Ala, apartment within a luxury resort

If you want to give yourself an apartment by the…

Owning a home is a keystone of wealth… both financial affluence and emotional security. 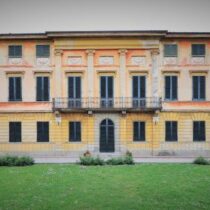